You know how they say all good things come to those who wait? Well that was definitely true for me, as I FINALLY made it out to visit Chuck and Corey, owners of Riot Axe in Guelph. Opened in August of 2016, Riot Axe (www.riotaxe.com) is a beautiful axe throwing club located at 101 Beverly Street, Unit D, close to the heart of The Royal City.

We sat down and enjoyed a Riot Axe beer (how wicked is that, they have their own beer?! www.royalcitybrew.ca) as I caught up with Chuck and Corey and got to learn more about their roots in the industry, their passion for axe throwing, future plans and more.

Chuck described their venture into Axe Throwing Ownership as something that they felt compelled to do. “It just felt right. We really wanted to get in on the ground floor of this sport as it was just exploding!” Chuck said. Guelph didn’t have an axe throwing location at the time so off they went! While they had a few speedbumps to overcome initially, they persevered and BOOM! Magic happened. Riot Axe was born. 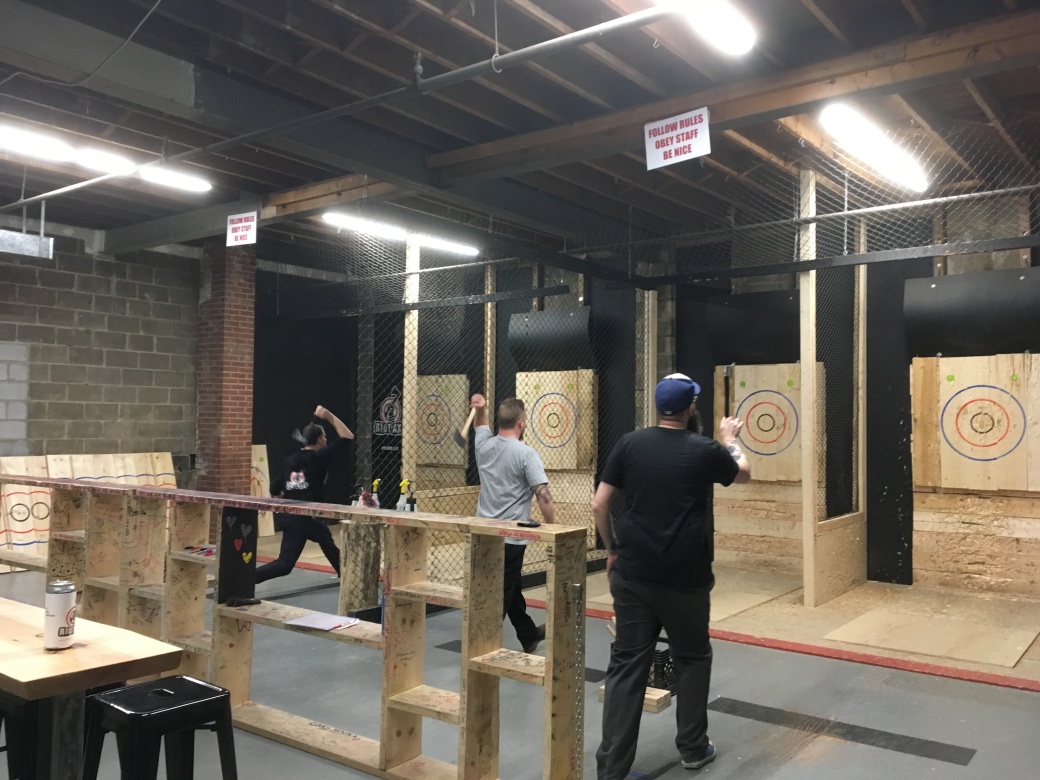 When I inquired about how they became one of the founding members of the NATF, they said it happened really organically. They reached out to BATL Kitchener to introduce themselves and say “Hi Neighbour! We’re new to the block!” and were approached to join the NATF shortly thereafter. While there are other organizations similar to NATF out there, Chuck and Corey felt that NATF was the gold standard. They really liked the organization, their vision, the community, and knew it was where they wanted to be.

Some of Riot Axes Décor and their House Axes

The first thing that struck me about Riot when I walked in was how much character was packed into the space. They have some beautiful artistry on the walls, comic book pages, merchandise, a Champs wall and a Supernatural Perfect board. While they only have one throwing arena, I consider it small but mighty (the acoustics in there are great, the sound of the axes splitting board just resonates beautifully). Although the following description may sound sexy….it’s an intimate space designed to bring people together. And that’s one thing Chuck and Corey love about Riot Axe. When people book an event and come in, their reaction is typically “We get this whole place to ourselves?!”. Riot Axe can offer a unique experience for their guests by having it be exclusively them. I really like this concept as sometimes (speaking from personal experience), it can be intimidating walking into a larger venue seeing lots of people throwing well, and being new to axe throwing. I think their venue helps people feel at ease. 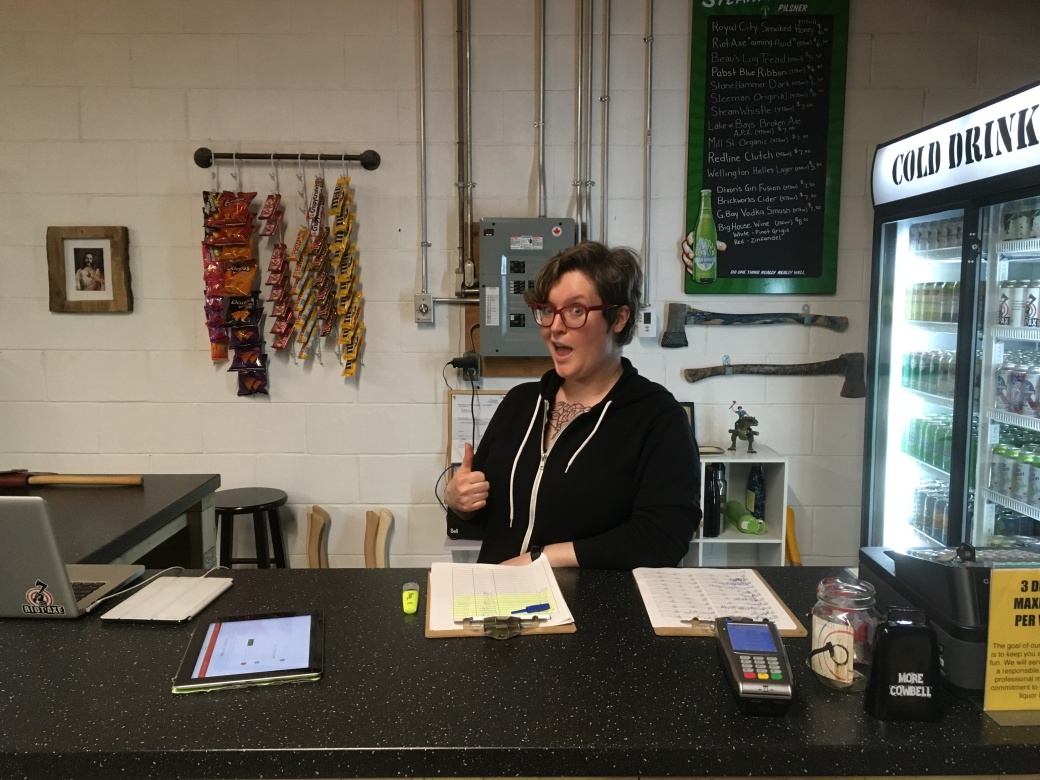 Ainslinn holding down the fort!

We went on a Monday night and the place was just buzzing with walk-in traffic (Monday nights from 6 pm to 9 pm they offer walk-ins…FYI). They recently offered their first ever Sunday walk-ins as well. If you are looking to get involved with one of their leagues, they run 3 seasons a year (Winter, Spring, and Fall) on Wednesdays and Thursdays, as well as a summer league that is “just for fun” (to be fair, axe throwing is ALWAYS fun). The summer league doesn’t count towards NATF standings however.                                     They have had a busy year and a half since opening; what with joining the NATF, holding numerous events, multiple leagues, and hiring 12 great staff members – Like Ryan and Ainslinn who took care of us – so what’s next? Right now they are really enjoying their time with Riot Axe. They have been approached to franchise but are happy keeping things as is until it feels right again. They are hoping to have another permanent walk-in night as well as potentially offering another league night. They have built a strong waitlist of individuals who are interested in joining their leagues, so perhaps their dreams will come true? 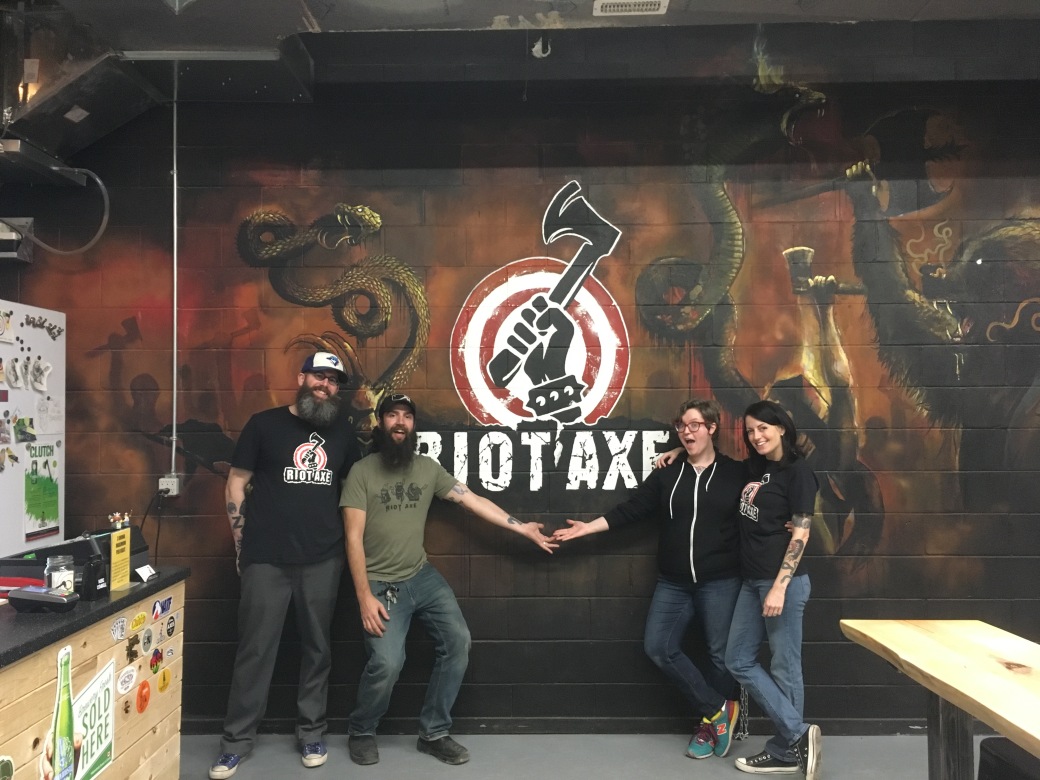 From left to right: Ryan, Corey. Ainslinn and Chuck

So to sum things up: great staff, passionate owners, beautiful venue, leagues, walk-ins, their own beer (10 cents of every can sold goes to the local humane society)…what more could you want? A bad ass oath perhaps? DONE! On a parting note I leave you with….